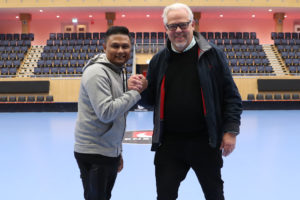 In the picture from the left Youth Floorball Academy’s Norani Zaini and Storvretas Ingemar Lundqvist.

As floorball spreads across the world so do the opportunities to collaborate over national borders and continents. When Youth Floorball Academy in Singapore reached out to the floorball club Storvreta IBK in Sweden it was easy to find common ground and a partnership agreement is in the works.

Among the things discussed were player and coach exchange programs as well as future participation in Storvretacupen and much more. Both parties hope to have a deal set in the near future that will pave the way for a long lasting relationship.

“We have a lot of the same focus. We want to help spread floorball internationally as well as look at how we can help benefit society as a whole through floorball.” says Storvreta IBK president Ingemar Lundqvist.

Storvreta IBK is one of the leading floorball clubs in the world. They have a record high six Swedish Championship wins on the men’s side, have a women’s team in the second highest league in Sweden and a large number of youth teams. They also host the world’s largest floorball tournament, Storvretacupen, that had close to 800 participating teams last season.

“We are always looking for ways to help our players and coaches develop off the court and think the Youth Floorball Academy would be the perfect place for that. We also see it as a great chance to help develop floorball in another part of the world,” Ingemar Lundqvist concludes.

“YFA is all about the development of floorball in Singapore and our aim is to be the top academy in Asia that produces top players. Storvreta is one of the top clubs in Sweden that has been producing top players. We are keen to look into having exchange programs and overseas training camps between Storvreta and our academy and our club the Black Wondersticks, for both players and coaches to upgrade themselves,” says Chief Executive Officer Norani Zaini and continues.

“At Youth Floorball Academy we also believe strongly in developing mind and character, aside from simply floorball skills and fitness. We look forward to inviting Storvreta players and coaches to conduct training camps in Singapore and also share the Swedish floorball way and Swedish culture with our academy and club players. We want to instill in our young players the importance of the spirit of the game, and not just to celebrate wins and successes. The cultural exchange programs will be beneficial for young players to understand cultural differences that can helps to grow and develop the floorball community in Asia.”

A Youth Floorball Academy brand, The Black Wondersticks, Singapore’s top men’s floorball club, is the 4-times Playoff Champion in Singapore Premier Floorball League and has some of the best players in the nation, including ex and current national players like Syazni Ramlee and Jenmark Sorreda. The Club also has P.Khambanlue (Thailand national player), who is half Swedish and half Thai, formerly played for Wårgårda IBK to play for the club in the Singapore Floorball Premier League 2019 and 2020.

Black Wondersticks is the only club in Singapore that currently has a youth development team. Black Wondersticks youth team was formed two years ago to be a platform for Youth Floorball Academy players to develop and be able to move on to become part of the senior team. This exclusive partnership between Storvreta IBK, Youth Floorball Academy and Black Wondersticks will help the Academy and the club become one of the best teams producing top players in Asia. The collaboration will also strengthen the Storvreta IBK brand in Asia.